A Short History of Catoctin Furnace

In some places, history lies buried far beneath the ground, covered over by the years and the ever-encroaching march of progress.  In other places, it is still right in front of us, proudly displayed for all to see.  The picturesque village of Catoctin Furnace is one of the latter types of places.  Its history is, in microcosm, the history of the Industrial Revolution in America.  The earliest European settlers to enter the Monocacy River Valley at the foot of Catoctin Mountain arrived in the 1730s.  As is usual in pioneer societies, the settlers pursued agriculture as their primary livelihood.  However, after the discovery of rich hematite ore deposits in the hills, industrialization rapidly swept into the valley.  The area was ideally suited to iron production, having rich ore deposits, flowing streams that could drive bellows, and a large forest that could supply charcoal.  From 1776 to 1903, iron companies mined the rich ore banks near Catoctin Mountain, smelted it in furnaces, and cast both raw pig iron and iron implements of every description.

Four brothers, James, Baker, Roger and Thomas Johnson, had the farsightedness to see the valley’s industrial potential on the eve of the American Revolution.  This group of enterprising men bought land at the foot of the Catoctin Ridge and there began construction of an iron furnace.  The Johnson furnace was in blast by 1776 and turning out a variety of useful tools and household items, including the popular ten plate or Catoctin stove.  Toward the end of the Revolutionary War, it also produced ammunition for the Continental Army, including shells fired during the siege of Yorktown.  Following independence, Thomas Johnson went on to became Maryland’s first governor.  In 1803, his brother Baker Johnson became the sole owner of Catoctin Furnace.  Shortly thereafter, he built a stately Georgian mansion, “Auburn,” still standing proudly just west of Route 15 at the southern end of the village.

Over time, the furnace site grew into a sprawling village community with specialized workers and everything needed to support them and the furnace.  A charcoal house, casting house, foundry, forge, stables, wagon sheds, saw mill, store, and church were all necessary to the iron operation, not to mention housing for miners, colliers, furnace fillers, founders, forge men, foremen, blacksmiths and other skilled workers.

Enslaved Africans provided a large part of the labor force at Catoctin Furnace in the early days.  Johnson enslaved more than 80 people including men such as Collier Sam and Waggoner’s Henry and Harvey.  Highly skilled and experienced, these enslaved craftsmen worked as blacksmiths, colliers, founders, and forge men.  They in turn taught youths these skilled and valuable trades.  In addition to their roles in the making of iron, members of the enslaved community toiled in the vineyard and at other agrarian tasks on large farms surrounding the furnace.  They also worked as domestic servants for the ironmasters and their families.

In 1820 John Brien, a wealthy Irish immigrant, bought Catoctin Furnace.  John and his wife Harriet subsequently purchased “Auburn,” where Harriet died in 1827.  As a memorial to his wife, and for the use of the iron workers, John built Harriet Chapel, which continues to this day as a self-supporting part of the Episcopal Diocese of Maryland and an important linchpin of the community.

By the middle of the 19th century, the number of enslaved workers at Catoctin declined sharply as large numbers of European immigrant workers moved into the area.  Hiring European immigrant labor was cheaper than keeping a large enslaved population to work at the furnace.  Some enslaved Catoctin Furnace workers may have been sold to buyers in southern states where the demand for and resultant monetary value of enslaved workers remained high.

Throughout the 19th century, periods of instability, changes and modernization characterized the industry at Catoctin Furnace.  In 1857, “Isabella,” a sophisticated new furnace powered by steam-operated machinery and a 33-foot-high furnace stack, was added to the complex.  “Isabella” was in continuous blast until 1893 and is still standing today.  In 1873 a third stack was built about 140 feet south of “Isabella”.  Named “Deborah,” this new stack was a steam and water powered, coal fired furnace with a daily capacity of 35 tons of pig iron.

However, it would be the growth of large corporations which could produce iron more efficiently, along with improved technology, markets, and transportation facilities, that would ultimately doom the Catoctin Furnace industrial complex.  “Deborah” was built in hopes of reviving the declining furnace, but in 1903 it was forced to shut down for good due to its unprofitability.  It was dismantled two years later.  The village, however, lived on.  Company houses eventually were bought by families who had been employed in the furnace operation.

Today, the stack known as “Isabella” is the focal point of the Catoctin Furnace remains.  The 1858 casting shed has been reconstructed next to it.  Running northwardly from the complex is a short tramway constructed in the mid-19th century to connect the furnace with ore banks a bit over a mile away just west of US 15.  Just south of the furnace on Maryland Route 806 are stone and log houses originally occupied by company workers.  A graveyard containing the remains of some of the enslaved workers is located in the area.  Most of the village houses are now privately owned, and the privacy of the residents should be respected.

Working in conjunction with Cunningham Falls State Park, the Catoctin Furnace Historical Society celebrates, studies and preserves the history of this important 18th through 20th century industrial site. In the heart of the village, the Collier’s Log House and the Museum of the Ironworker have been carefully restored by the Society and are open by appointment and during special events.  An interpretative trail connects the furnace area to the Museum of the Ironworker and the center of the village.  The restored ca. 1821 Forgeman’s House will soon be available for overnight rental.  Self-guided walking tour brochures for the furnace area and the village of Catoctin Furnace are available to allow you to experience history around every turn.  That history continues to be an important part of the life blood of this vibrant community and we invite you to explore it with us, on this site and in person at our events. 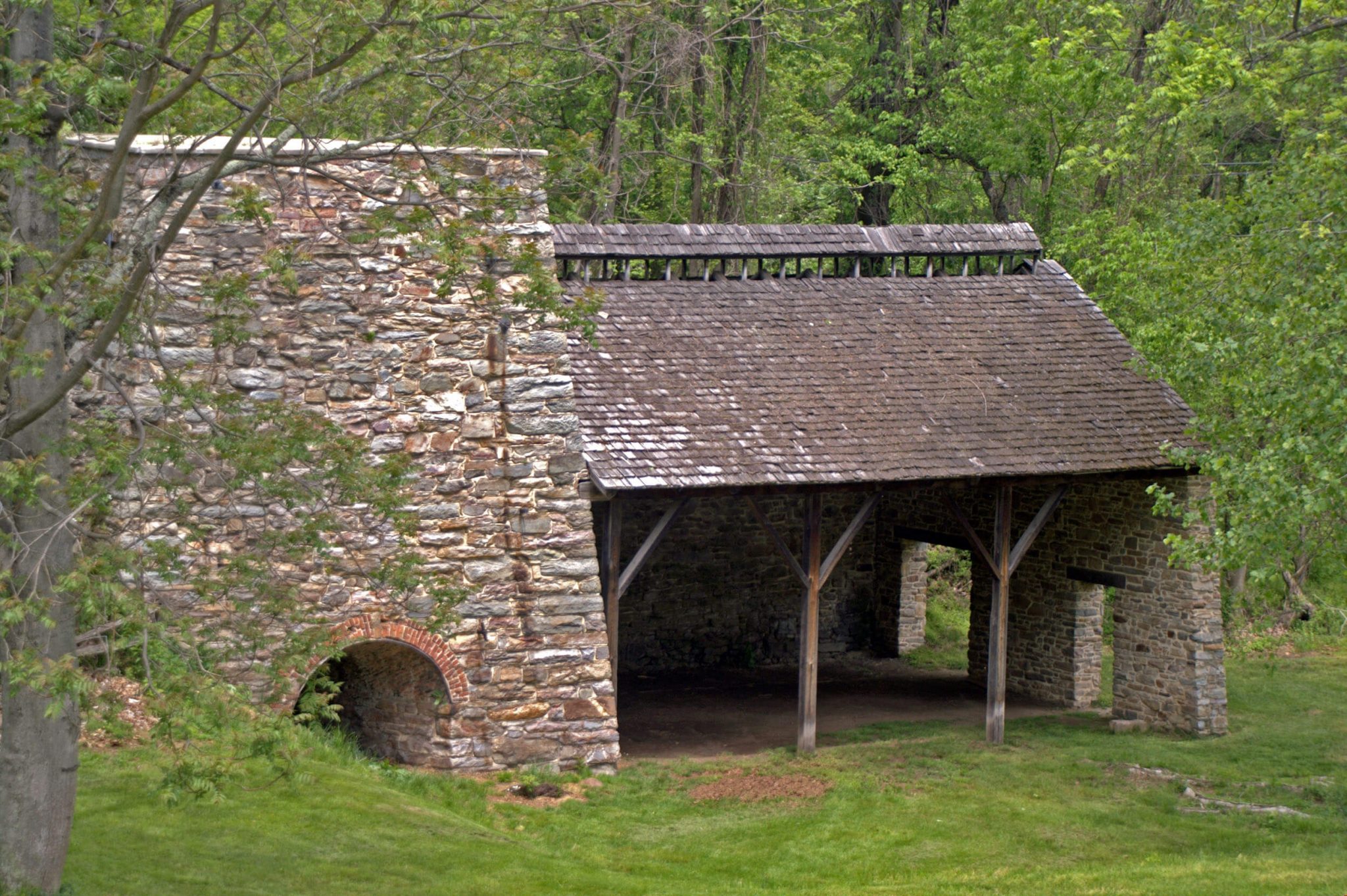 The Catoctin Furnace Historical Society, Inc. has a copy of the Upper Mine Branch Ledger from 1899 to 1901 at the Collier’s Log House. The Ledger lists each person by name, days worked, pay rate, and total wages paid. It subtracts merchandise at the company store, rent paid, and wood purchased. At the end of the month, many received no pay. The names will be familiar to all village families as well as many in the Thurmont area. If you are interested in seeing the ledger, please attend a monthly meeting or contact Elizabeth at ecomer@catoctinfurnace.org or 410-243-2626.