The double log house at 12607 Catoctin Furnace Road is unusual in Catoctin Furnace as it is the only extant double log house. It was home to furnace worker families for over two centuries. Restored in the 1980’s, it is now a museum and interpretive center telling the story of Catoctin Furnace and the iron-making enterprise at the village’s center. The exact construction date of the house is unknown, but it is assumed that the larger section was constructed first around 1810 and the smaller section added about 1830.

In the rear of the house, you can delight in our beautiful historic kitchen and pollinator gardens, which were created in partnership with the Green-walled Garden Club. They are open daily until sunset. 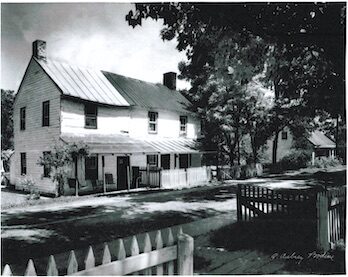 The log structure at 12607 Catoctin Furnace Road served as the headquarters of the Catoctin Furnace Historical Society, Inc. for more than three decades until the opening of the Museum of the Ironworker. It is now interpreted as a typical home of two furnace families in the nineteenth century. The dwelling is unusual in Catoctin Furnace as it is the only extant double log house. The two dwellings within the duplex share a common interior wall and there is an interior brick chimney on each end.  Prior to restoration, the “A” roof was tinned over shingle and the square, roughly hewn logs were covered with white siding.  The gable is clapboard.

The exact construction date of the double log house is unknown but it is assumed that the larger section (south side) was constructed first ca. 1810 and the smaller section (north side) added ca. 1830.

On July 13, 1811, a public sale notice published in the Frederick Town Record listed the Catoctin Furnace complex and described it as containing 15 to 20 houses for the accommodation of workmen, all in good order.  The Frederick County Tax Assessment Book for 1876 (No. 15, p. 80) described the furnace complex and included a count of  50 tenant houses.  Today, ten of the original furnace worker houses (four stone houses and six log houses) stand adjacent to Old U.S. Route 15 (Catoctin Furnace Road) beginning approximately 600 feet south of the furnace.  There are also furnace houses of later architecture existing east of stacks No. 1 and No. 2.  The 1873 map by Lake shows 15 houses adjacent to the highway, 14 houses north and west of the furnace, and 17 structures adjacent to the highway and north of the furnace.

The Blue Mountain Iron Company shut down in 1892 due to the low price of iron.  In 1899, the Blue Mountain Iron and Steel Company bought the property, beginning operations the following year.  In 1903, the furnace shut down permanently and declared bankruptcy.  On February 19, 1906, Joseph E. Thropp and his wife purchased the property and dismantled the iron furnace, taking the valuable equipment to his furnace in Pennsylvania.  For a few years, Thropp kept the mines open at Catoctin and shipped the ore to Pennsylvania.

In a 1982 interview, Mary Miller Martin told Elizabeth Y. Anderson that “there are strong traditions that certain houses at Catoctin Furnace were at one time slave quarters,” although she did not identify specific structures. The log house may have been built by enslaved or freed Africans, or served as their home.

The last tenants to live in the north side of the log house while it was still a company house owned by the furnace operation were Baker and Sarah Sweeney Anders.  After the furnace closed, the small dwellings were sold to private owners, mostly former workers in the mines and in the furnace.  In 1923, the Anders family moved from the double log house and purchased two of the larger cottages on the opposite side of the road, closer to the furnace.  This was a typical pattern for the former furnace employees: they purchased furnace houses when the opportunity finally arose, and they stayed in the village.

Lancelot Jacques, Sr., and his wife, Alice B. Jacques, and Stanley E. Hauver and his wife, Emma B. Hauver, sold the smaller, northern section of the double log house on August 25, 1923, to W. Ellsworth Stitely, a former furnace employee, and his wife, Grace L. Stitely (Liber 344, Folio 518).  After Grace Stitely’s death, it was inherited by Donald and Pauline Elizabeth Miller.  However, the Stitelys’ daughter, Margaret Stitely Hewitt, and her son, Ronnie Miscal, retained the right to live there.

The larger, southern section of the house was owned by several generations of the Fraley family.  Franklin W. and Ida Fraley owned the dwelling and it was inherited by their son Franklin R. and his wife Louise E. Fraley.  The Fraley family opened a slaughterhouse in the mid-twentieth century. Some of the tenants of the log house worked for the Fraleys in the slaughterhouse.

Beginning in the 1960s, the construction of the new U.S. Route 15 through the Catoctin Furnace area threatened the homes and industrial heritage of the village.  Local residents searched for ways to preserve the village and the ruins of the iron furnace.

On August 28, 1972, G. Eugene Anderson, Clement E. Gardiner, J. Franklin Mentzer, and Earl M. Shankle filed articles of incorporation for the Catoctin Furnace Historical Society, Inc., stating that the purpose of the organization was to foster and promote the restoration of the Catoctin Furnace Historic District for educational and scientific purposes.  A second stated purpose was to “acquire and maintain the old country store and dwellings in the community of Catoctin Furnace so as to exhibit to coming generations our heritage of the past.”  Historical society members began searching for a property to restore to serve as the new society’s headquarters.  In April 1977, the Fraley family granted an option to sell their section of the double log house to the Catoctin Furnace Historical Society, Inc., for $6,000 (Lot 409, Liber 450, Folio 514). In July of the same year, the Millers and Margaret Hewitt did the same for the northern section of the property for $3,000 (Lot 410, Liber 950, Folio 314).

On December 30, 1980, Thomas Franklin and Grace Downey Riggs purchased the double log house with the intention of donating it to the Catoctin Furnace Historical Society, Inc. (Liber 1135, Folio 650).   The transfer to the historical society took place in 1981.  Restoration took place in the 1980s with public and private funds.

Tenants during the ownership of Franklin W. and Ida Fraley and their son and his wife, Franklin R. and Louise E. Fraley (ca. 1947-1977):

LeRoy and Virginia Grable (in 1947 for about 6 months)

Ellsworth and Grace Stitely, their daughter, Margaret Stitely Hewitt, and her son, Ronnie Miscal (1923 until 1977)